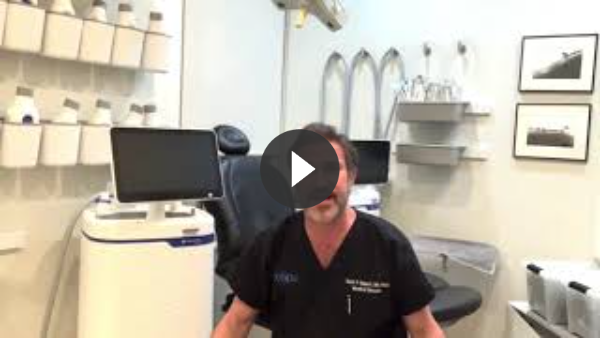 We all have stubborn areas of fat that just won’t respond to time at the gym, and don’t even respond as much as we wish to weight loss. Working out and watching your weight is an important part of staying fit, but you can’t control where on your body your fat is deposited when you gain weight, or from where on your body it leaves when you lose weight. Crunches don’t necessarily burn belly fat; nor does running necessarily burn thigh fat. Exercise burns calories but your body decides (based more than anything on your genetics) where the fat comes from to pay that caloric debt. With arguably the best body sculpting NYC has to offer, Coolspa can help you get rid of that stubborn fat.

Here’s another way to look at it: Our fat calls are basically our microscopic safe-deposit boxes where we store fat, which is the body’s reserve source of fuel and energy. Remember, we have evolved over many thousands of years to survive prolonged periods of starvation. So our bodies are brilliantly programmed to convert any excess calories we eat into fat, and store it in our fat cells. Unlike the safe-deposit boxes you find at the bank, which are made of steel, fat cells are amazingly flexible. They grow bigger and bigger when excess fat is deposited into them, such as after a rich meal. And they shrink down to near-nothingness when we aren’t eating enough calories and so we make ‘withdrawals’ of fat to help feed the body.

Now here are a couple more facts: We all have many billions of fat cells. In fact, the number of fat cells that we have, and the distribution of those cells are both pretty much fixed from very early in life (around one year in age). The reason that different people have different shapes is that their fat cells are distributed differently. The woman with disproportionately wide outer thighs has more fat cells in that area, and therefore she perceives it as a stubborn disproportion. One man may have a relative ‘hill’ of fat cells under his chin; another in his love handles, and so on.

Therefore, based on the above, whether we are gaining or losing weight, it’s always based on our fatty proportions; we always maintain those proportions. That is, unless we perform a true spot reduction procedure. Historically, liposuction was the only option for spot reduction of fatty bulges. Until CoolSculpting came along…

CoolSculpting® has expanded the ability of their system to treat more areas of body at one time. They are offering a new generation of platforms and re-engineered applicators that deliver better results while at the same time are much more comfortable to the person.

Dr. Rapaport was one of the early adopters of CoolSculpting in 2010. He later founded Coolspa in 2014 to create an office that specifically delivers the best possible results with CoolSculpting, as well as other cool treatments.

“The elite platform design is simply beautiful. It has a large interactive screen for ease of user interface. It is lighter and so much more refined in appearance and best of all, each platform holds two applicators rather than one. This means that it is now possible to perform CoolSculpting on four spots at once: QuadSculpting is now something we can readily do!”

“Having had pre-release access to these units, Coolspa has performed over 200 cycles using the Elite and we are already seeing improved results. But also noteworthy is that the patient experience is also more comfortable both during and after the treatment.” To learn more about CoolSculpting Elite Click here. 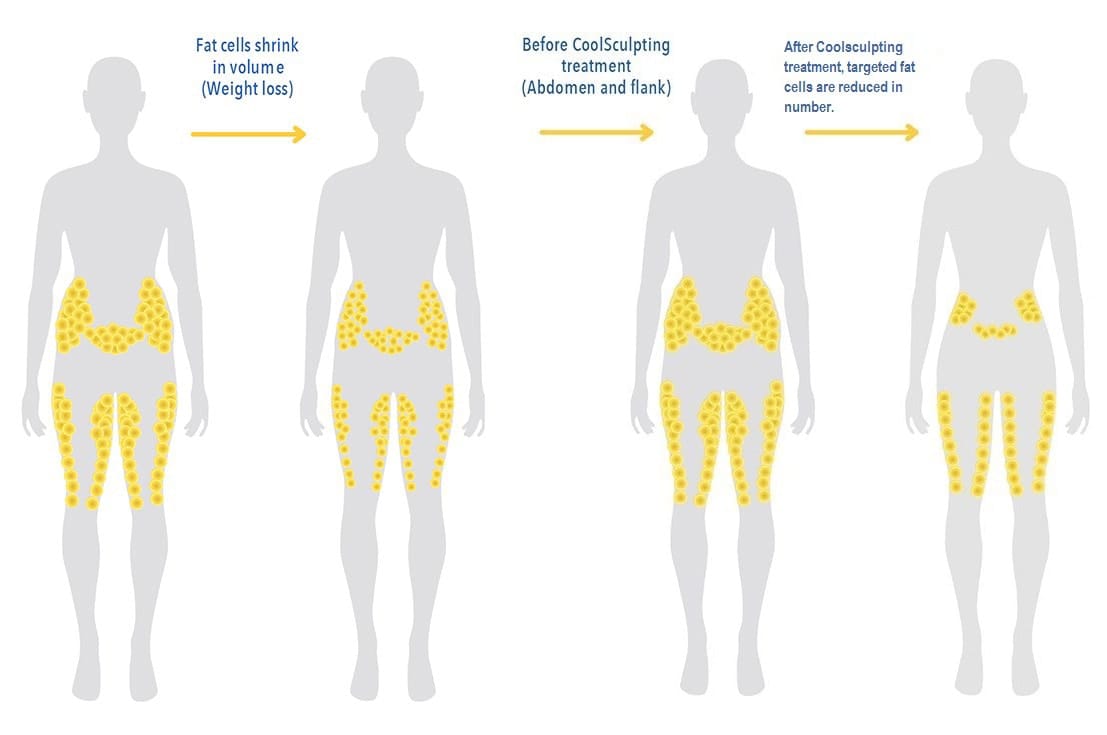 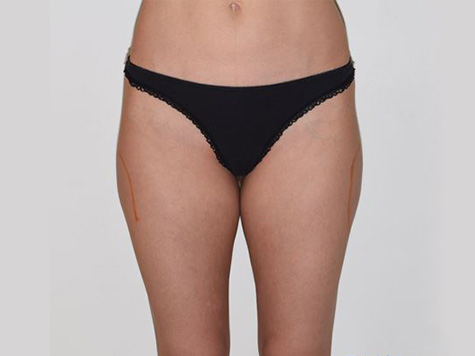 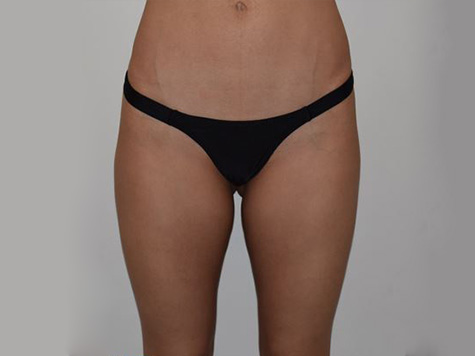 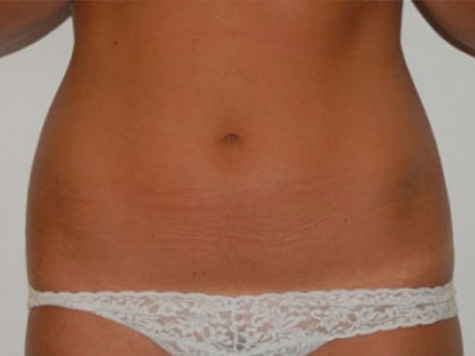 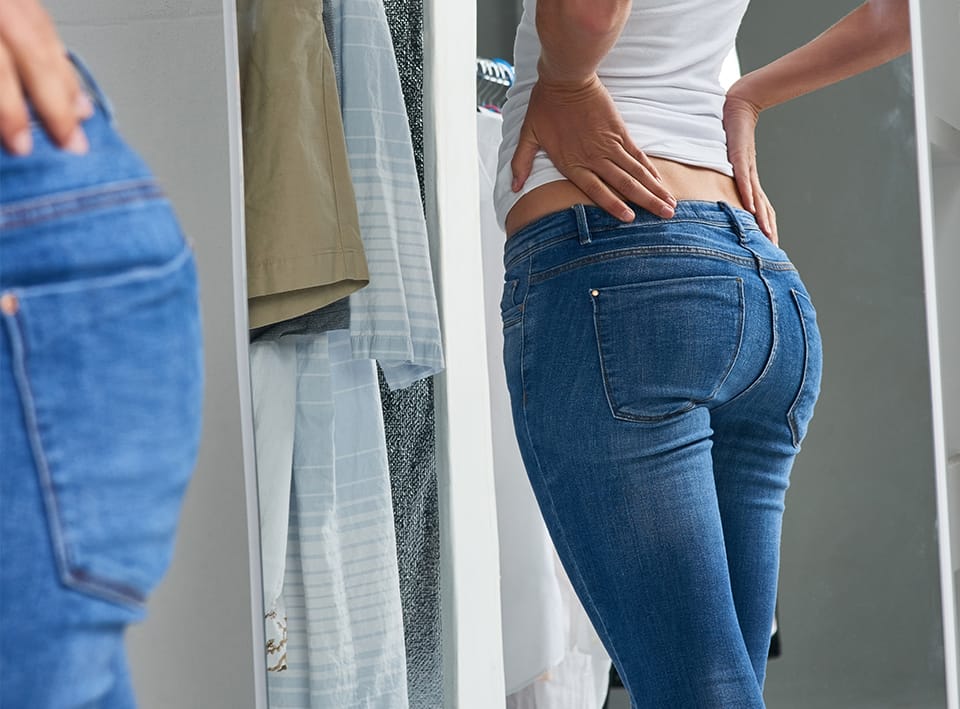 CoolSculpting, launched in the US in 2010, is a technology-based system which basically freezes fat cells away. As discussed above, when we gain and lose weight, our fat cells basically grow and shrink, but our proportions pretty much stay the same. CoolSculpting is revolutionary in that it lets you target your stubborn fat with “spot treatment.” That means the fat comes off where you want it to. And for the first time, safe and effective spot reduction of fatty bulges can be performed noninvasively, and with no downtime. 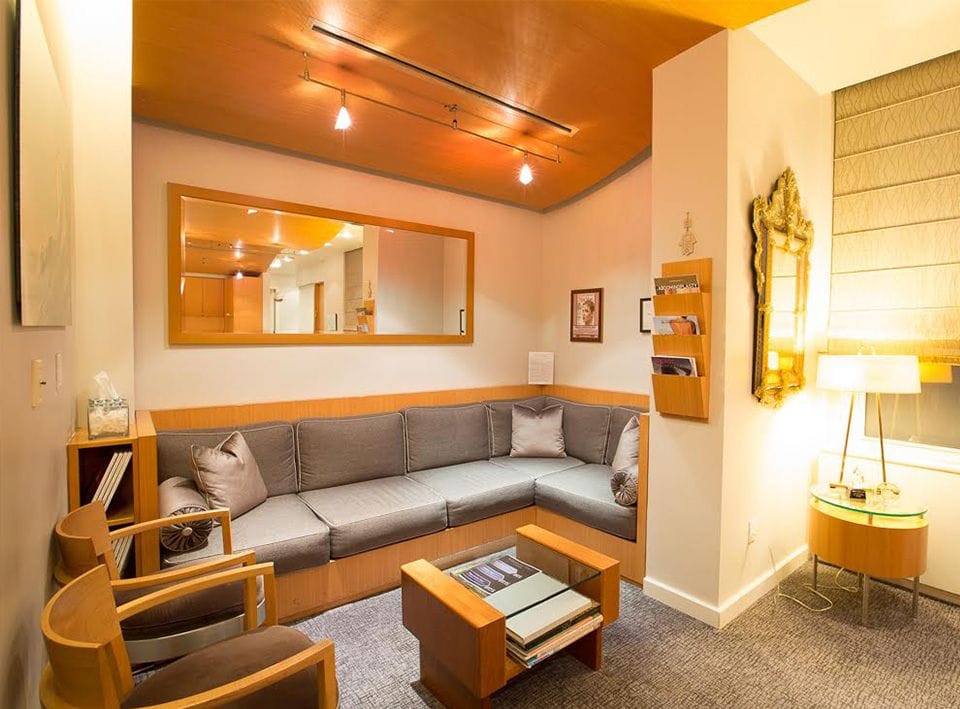 Coolspa is not your everyday medspa – far from it. Our extraordinary team of medical and aesthetic professionals understands the importance of achieving results. If you are ready to embark upon the journey to a more sculpted body or restore a more youthful facial appearance, we invite you to discover our full array of non-invasive treatments. 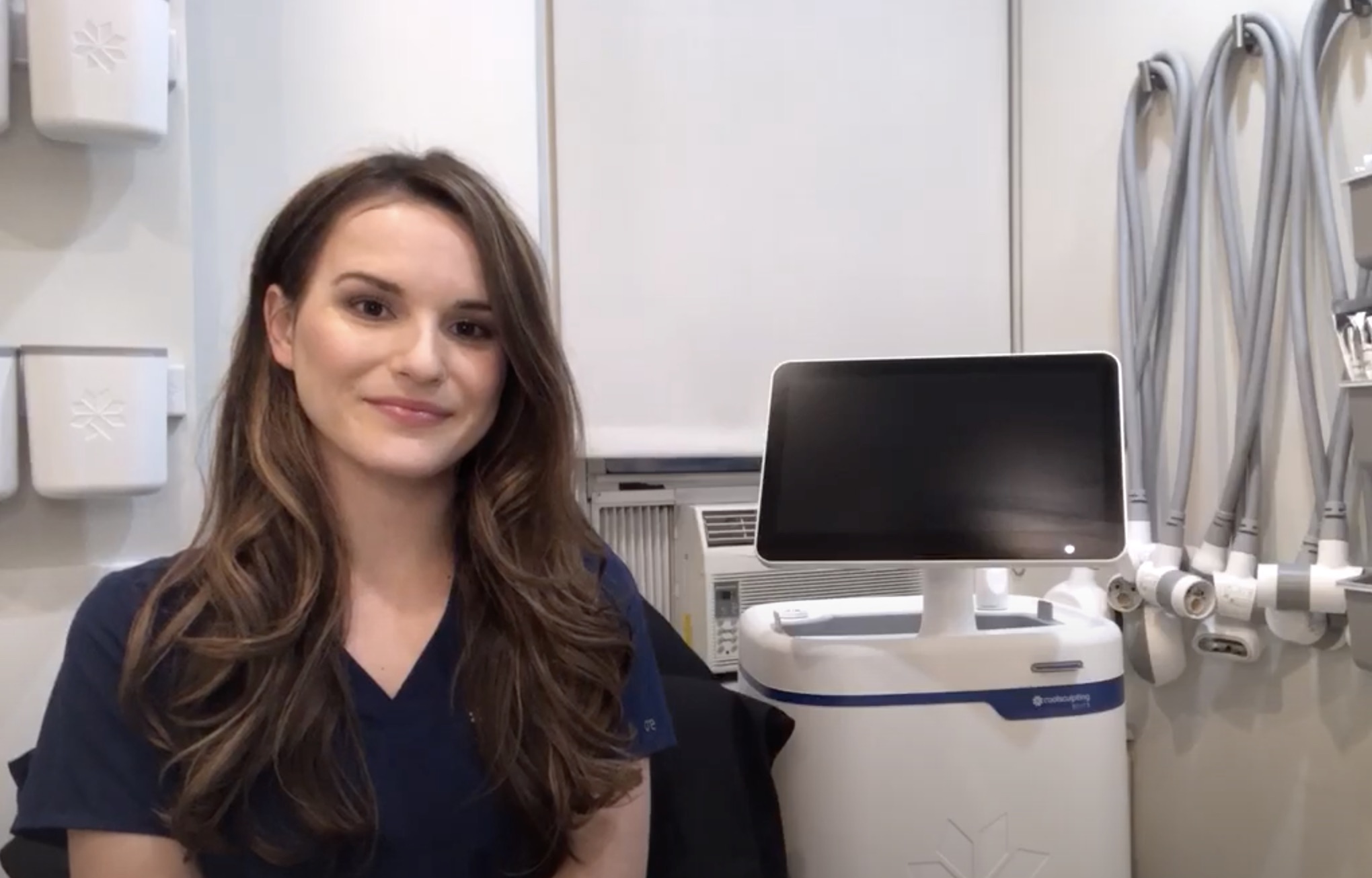 CoolSculpting works by taking advantage of the fact that fat cells are more sensitive to cold than the other cells around them. This basic scientific fact was first discovered in 1970 by doctors observing children who sucked on popsicles for hours, and ended up having first soreness, and later dimples, caused by loss of fat cells! Fast forward about 20 years, and Harvard scientists revisited this fact, and realized that they could turn this science into a system for aesthetic sculpting of fatty bulges. The key was to find the ‘sweet spot’ of time and temperature, which would kill some fat cells but not damage surrounding structures such as skin. They called the public company that makes the systems Zeltiq. The proof of the success of this concept and treatment: Zeltiq was bought out by Allergan in 2016 for whopping $2.5 billion! This was the largest sale of a single medical device company in history.

This safe, effective, FDA-approved treatment uses a revolutionary cooling method to effortlessly freeze unwanted fat deposits, reshaping your body in the process. Treatment is fast, so you can come in for 1-2 hours of treatment and be back to work or school the very same day. We have multiple CoolSculpting treatment units, so we can work on multiple parts of your body at the same time, further reducing your in-office hours. CoolSculpting provides excellent results that can be seen within one month of treatment, and clients experience an average of 20-25% reduction in their treatment zones.

Benefits of CoolSculpting include:

CoolSculpting is ideal for treating…

Who is a good candidate for CoolSculpting?

While CoolSculpting is highly effective at toning, slimming and contouring the body by reducing local deposits of fat, it is not considered a method of weight loss.

The best candidates for CoolSculpting are within a healthy weight range, but have excess fat that creates an aesthetic disproportion and does not seem to respond to diet or exercise. To learn more about whether CoolSculpting is right for your needs, please contact our office today to set up your private consultation in the comfort and privacy of our NYC offices. 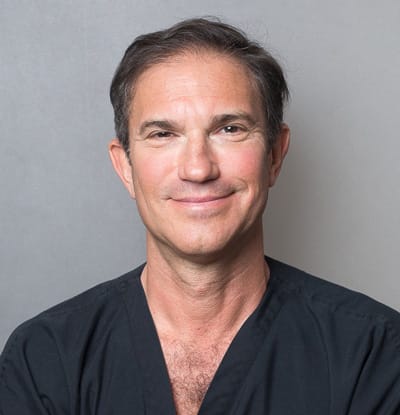 Dr. David P. Rapaport, founder and Medical Director of Coolspa, created Coolspa to address the need in New York for a patient-centric, high quality facility where clients could experience top-tier body contouring in a relaxed, comfortable setting. Most importantly, the Coolspa ethos is based on patient education. Only by being educated about their condition, all relevant treatment options, advantages and disadvantages of those options, can patients make optimal treatment decisions.

As a Harvard and NYU-educated, board-certified plastic surgeon, Dr. Rapaport has a track record of over 27 years of achieving exquisite results for his clients, and is dedicated to providing the most innovative and groundbreaking new treatments on the market. At Coolspa, each patient receives a customized, one-on-one consultation and treatment that targets their unique trouble zones. This personalized attention coupled with expert skill and artistry is the reason why Coolspa is known as NYC’s premier body sculpting center. 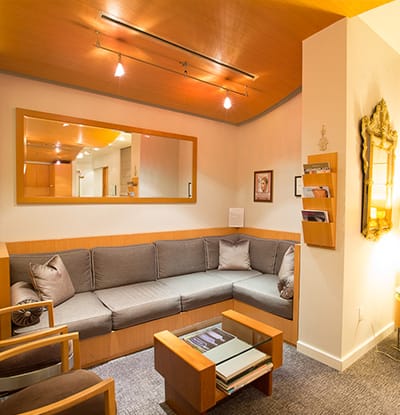 Why choose our practice?

Our seasoned, knowledgeable staff and immaculate, accredited facility conveniently located in Manhattan makes Coolspa an easy choice for superior body sculpting in NYC. It’s important to remember that unlike so many of our competitors, all CoolSculpting treatments at Coolspa are overseen by plastic surgeons specializing in body contouring, so that you are receiving the optimal treatment for your condition and based on your goals. 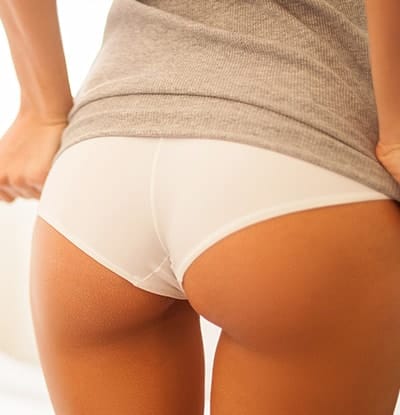 What to expect from treatment

CoolSculpting is a gentle, 40 to 75 minute treatment (depending upon which applicators are used) during which you may watch movies, TV, read, listen to music, nap, or work on your laptop. The Coolspa specialist will outline your target zones with a surgical pen, and then apply a soothing gel. Next, the cryolipolysis applicators will be placed strategically over your skin, drawing the target areas inside. Each applicator is computer monitored to ensure its proper temperature at all times.

Once the process is complete, you can safely return to your day, knowing you have taken an effective step toward lasting contour improvement. 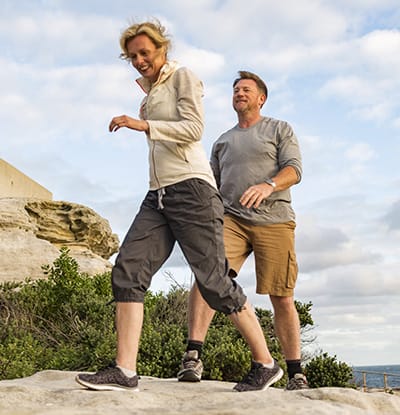 Recovery from CoolSculpting is quite easy, partly because no needles, lasers, or surgery are involved in the treatment process. Some clients may experience minor redness, tenderness and tingling, however, these side effects tend to evaporate within hours or days.

Results will be visible within the first 3-4 weeks and will continue to impress in the months that follow. At 2-4 months, most clients will see their full outcomes on display. According to the FDA, a CoolSculpting treatment reduces the amount of fat by an average of 20-25% in the area treated. With repeated CoolSculpting sessions, this number can climb. Be sure to schedule a follow up visit following your treatment to assess your results.

How CoolSculpting differs from other non-invasive techniques

CoolSculpting is unique in that it is the only method of fat loss that utilizes freezing technology. Other methods involve the use of heat, and include ultrasound energy, lasers, and radiofrequency. CoolSculpting is more effective in removing fat and does so with more comfort than these other modalities. CoolSculpting is, in fact, the world’s leading technology for the noninvasive reduction of localized collections of excess fat.

If you are interested in finding out more about the possibilities with CoolSculpting at Coolspa, don’t hesitate to schedule your complimentary consultation today at our beautiful Manhattan office.

During your initial visit, the doctor will learn about your body contouring goals, perform a thorough evaluation of your contour, skin quality, and fat distribution, and begin to formulate your unique treatment approach for aesthetic improvement.

At Coolspa, we make a sincere effort to educate and inform each client to the fullest so you can make the best decisions moving forward. Our staff will also invite you to visit our extensive gallery of before and after photographs so you can begin to form more accurate expectations for your outcome.

Why should you have treatment with us?

RETURNING TO PATIENT CARE AS USUAL, ONLY BETTER!

We are excited to announce that as of June 8th, 2020, our office will be open for ALL appointment types including Cosmetic Injectables, CoolSculpting, CoolTone, Morpheus8, miraDry, Skincare services, and more!

During this time, we are still encouraging virtual consultations & follows up as an initial step prior to an in-person appointment. We are requesting that established patients virtually consult/review their treatment plans with one of our physicians or medical aestheticians in advance of their scheduled treatments/procedures. We will be providing you with specific procedure-related instructions prior upon scheduling. If you left a deposit for a treatment and have not yet been contacted by our staff, please call, or e-mail our office so that we may get you scheduled.

The Coolspa team has been working diligently to get our office prepared for our re-opening. Our main priority is the health and safety of our patients and staff. Thank you for following our guidelines and being so patient. See below for our re-opening guidelines:

For any questions and/or concerns, please call our office at 212-249-4990 or email us at Concierge@Coolspa.com. We know each of you are eager to get back to your treatment regimens, so we will be extending our hours to accommodate everyone as best we can while maintaining health & safety protocols!

We thank you for your continued support & confidence in Coolspa and our staff the past few months. We look forward to welcoming you back to our office!